Before I proceed with the topic of this post, I am going to give you a little background on both the seasonal and climatic zone in which my garden is based.


I live in the western cape of South Africa, not more than 2 hours drive (in an easterly direction from my home), from Cape Agulhas, which is the southernmost town in Africa.

Our regional climate zone is Mediterranean.  Most of our rainfall occurs during the winter months (June, July & August), when our prevailing winds come from the north west.

We have long, hot, dry summer months (November, December, January), with our hottest month frequently being February.  During summer, we are at the mercy of prevailing south easterly winds and we have scant rainfall.

The biome of our surrounding area is largely Cape fynbos and is considered one of the richest biodiverse areas in the world.  It is a very fragile system and has Ramsar status.  The protea is probably one of the most recognisable of the Cape fynbos species worldwide.

Right now, we're seeing out the end of spring 2010. Spring is a beautiful season as it is everywhere else!  We have chilly to cold winters, with very occasional snowfalls on the highest reaches of the surrounding mountains. We do not get frost and, even though our winters are cold and wet, this is the time of year that everything is at its greenest and the light is at its best.

Our seasonal changes are fairly defined, but not nearly as dramatic as those experienced in northern climes.  We never have to wear layers upon layers of winter gear and sturdy fur-lined boots.  We actually enjoy some of our most beautiful, crisp, clear days in winter when the sun shines and we can be outdoors for a good part of the day, often only wearing a light jersey. The sun sets at about 18h00 in winter, while in summer we enjoy long, languid days with the setting of the sun happening as late as 20h45.  Our summers can be very hot and humid and we long for a thunderstorm to break the heat - however, we hardly ever have those in our part of the country.

This is very much a wine-growing region (as in the Mediterranean) and we have some of the finest wine farms in the world, beautiful nature reserves, exquisite mountain ranges and long stretches of beach literally on our doorstep.  I am very privileged to live here.


Ok, enough of the geography lesson..Toby is pestering me to get on with showing you the wetland garden as promised!


As with almost anywhere else, we have our fair share of challenges when it comes to making a garden.  The first thing we did when we moved into our newly built home 27 years ago was to plant TREES!  Shade was going to be an absolutely crucial requirement for the type of garden I was envisaging.  Had we gone indigenous, it would have been less of an issue, but I need water, trees, ferns and moss to feed my soul and so it was essential to create shade for this to be even remotely possible.  It has been a long, slow process to get to where our garden is at today!


Wetlands are among the most biologically productive ecosystems in the world, but due to increasingly uncontrolled human activity, many of the world's naturally occurring wetlands have been degraded and, in some cases, completely destroyed...all in the name of development!  Ecologists have long been highlighting their importance, as they know wetlands are among the earth's greatest natural assets.  As a result, efforts are now gradually being made to protect existing wetlands, restore damaged ones, and even develop new, artificial wetlands worldwide, but it's a slow process frought with obstacles and still hampered by mankind's insatiable need to conquer and dominate the natural resources of our magnificent planet.
As gardeners, there's not much we can do (singly) to influence world powers, but we can at least attempt to recreate aspects of these naturally occurring systems in the limited confines of our own backyards.
How can we do this?  We can turn all of our vegetable peelings, eggshells, used teabags, coffee grounds, old newspapers and lawn and garden clippings into compost to be reused in the garden to enrich the soil, naturally (and yes, I do have a compost heap!).  We can start a worm farm (yes again - I have a worm farm!) and feed them all of these scraps so they can set about producing their humus rich castings.  We can lead the bath and shower water directly into the garden thereby creating our own mini, wet area (yes, we do this, too!).
We can attract wildlife to our gardens by using far fewer chemical pesticides and fertilizers (we try very hard to do this).  We can spread bark chips and logs and rocks and pebbles throughout the garden (as you've seen, I do this a LOT!).
We can allow leaves to remain unswept in the beds in which they've fallen (yes again!!!).  We can put out breadcrumbs, seeds and pieces of fruit (the birds that visit here think this is a 5 star hotel!).  In doing so, we'll be creating an environment attractive to all the beetles, earthworms, spiders, birds, bees and butterflies that will flock to our garden and set up homes.  We'll be doing our tiny bit towards preserving the natural order. It really is THAT SIMPLE! 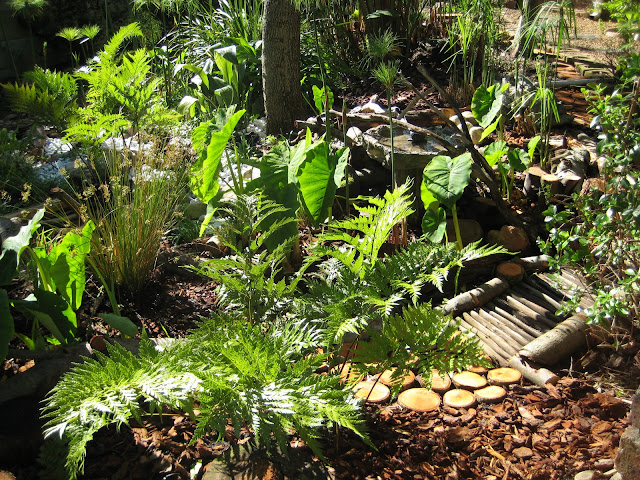 I leave you with these words from Inversnaid, a poem about wetlands by Gerard Manley Hopkins ~
What would the world be, once bereft
Of wet and wildness?  Let them be left,
O let them be left, wildness and wet,
Long live the weeds and the wildness yet. 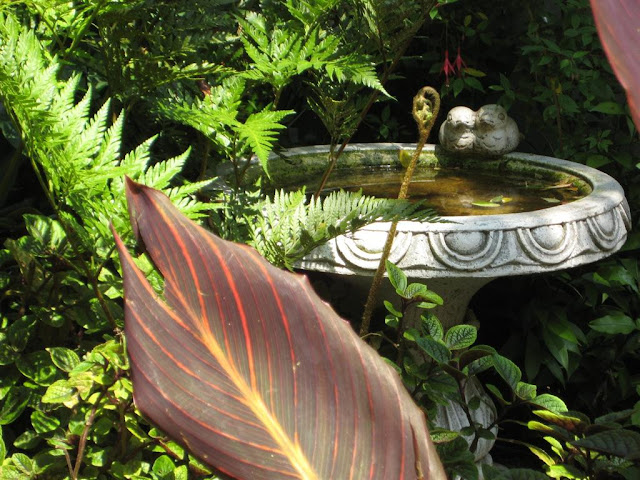 Have fun creating your own wetland garden!
Posted by Desiree at 10:01 PM